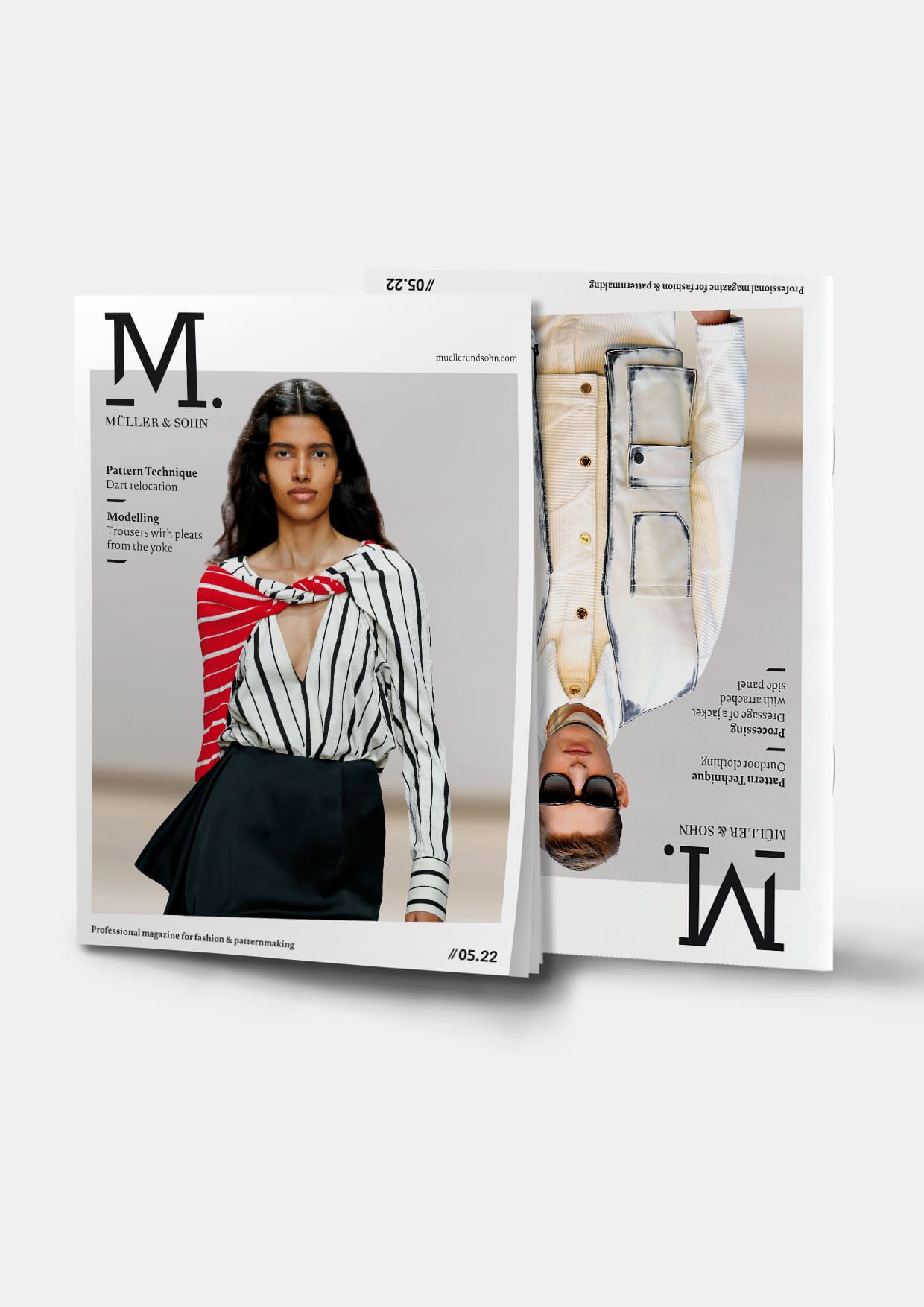 The magazine specialized in fashion and pattern making is published ten times a year as a turnaround edition with topics on women’s and men’s fashion. The magazine is available for download in English. Each issue of M. Müller & Sohn magazine contains an enclosed sewing pattern.

On the women’s fashion pages we interviewed Sarah Magras, who after her apprenticeship on Savile Row at the Maurice Sedwell atelier, rose through her talent there to become a master tailor and director. And rightly so, as her winning piece at the Golden Shears, the Oscars of tailoring, proves. In her work, Sarah Magras moves between experimentation and tradition, and so the coat in the check mix not only contains high craftsmanship but also an examination of her own origins and history. As with checks, stripes also have to be painstakingly adjusted during processing, which is visible in the pieces currently shown on the catwalks, sometimes striking in high contrasts, sometimes rainbow-like, all in the vibe of the 70s. Precision is also important in modelling, and we show you how to drape a pair of trousers with pleats from the yoke and in the pattern making section we give you an overview of a wide variety of dart variations.

On the menswear pages we turn our attention to tweed, specifically to an up-and-coming weaving mill called Dashing Tweeds, THE address for tweed fabrics among connoisseurs, where co-founder and creative director Guy Hills together with Kirsty Mc Dougall have been developing tweeds as well as special yarns and effects in exciting colours since 2006, and the long list of customers as well as visitors to the London scene dressed in Dashing Tweeds prove that the revival attempt has been successful! The realisation of a dream in checked tweed was entrusted to men’s tailor Sandro Dühnforth, who has been running a studio in Hamburg for ten years and with whom we talked about difficult early years, pricing, and his ambitions to protect the craft. Our processing section is about the important technique of dressage. And in the pattern making part we take you on an outdoor expedition!

The topics (women´s) at a glance:

The topics (men’s) at a glance

In this e-dossier, you will find instruction on pattern construction for two different fitting problems with body proportions for men.
15,80 €

In this e-dossier, you will find instruction on pattern construction for four different basic trouser blocks for men.
15,80 €